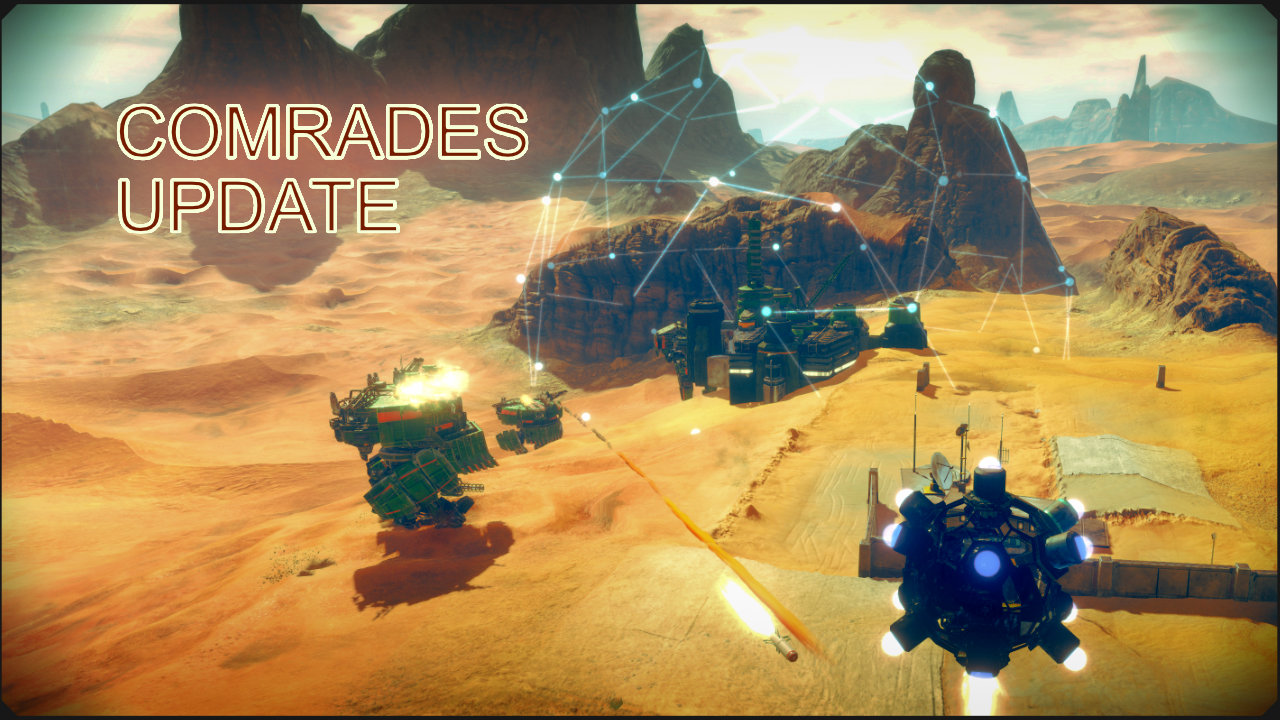 These are challenging times, so we here at Space Bullet would like to stoke the spirit of perseverance with our Comrade Update for Vox Machinae. Front and center is our new Comrade System, our cross-platform friends/ignore list that seeks to encourage in-game gatherings locked in the heat of glorious grinder combat. Additionally, upgraded visual fidelity (improved shadows and 3D menu), a new sports-inspired game mode, and lovingly reengineered underpinnings all make for our most performant and laboured update yet.

Our new cross-platform friends/ignore system is finally here to help you organise with your fellow grinder pilots. The new profile menu lets you check out the status of your VOX comrades, join the server they’re in, and keep tabs on ignored players too. Personalise your pilot’s profile with a visual icon that will show up in-game and in-radar to your team. Additionally, ignored players will now persist across sessions as well as servers and are automatically muted so they’ll never bother you again. We also took this opportunity to move loadout editing and your pilot settings into the profile menu.

Hover Brawl is here, and it’s just about the closest thing to a sport that Vox Machinae has ever seen. Guide the mysterious voxy ball back to your team’s base using any combination of melee impacts and firepower. Each of Vox Machinae’s weapons will affect the voxy ball differently, so experimentation and tactics will be key to your team’s success.

Spectating a match has been streamlined and upgraded with a couple of major changes. We’ve created a spectator team that players can join if they just want to watch a match. Doing so still takes up a player slot, though they get to fly around in our new spectator pod which doesn’t interfere with the match. We also added a new tabletop mode that’s available to spectators which while similar to our old spectate mode, offers a greater sense of depth.

As a happy byproduct of one of the many other under-the-hood optimizations, it became possible to add depth to our menu systems. We always envisioned the game’screens to be powered by some sort of primitive holographic tech so this was the perfect opportunity to make that a reality. Several weeks of tinkering and unforeseen complications later, here it is.

*Note that 3D Menus are only visible in VR Mode.

As always, our content updates come with a bevy of other improvements and tweaks, so here are just a few standouts: